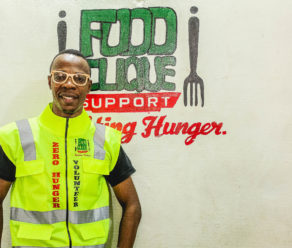 Bolajoko is the Founder of FoodClique Support initiative. He is a graduate of Computer Science from Yaba College of Technology. He is an energetic and dedicated team player with vast knowledge on contemporary issues and how to make things work out at a minimal cost.

As Founder of FoodClique, He oversees food sourcing, brand building, member relations, compliance and planning. According to him nothing drives him more than the belief that eradicating hunger is possible if more people care.

His job entails that he is always involved in all parts of the organization, from engaging with the volunteers to leading meetings and drafting partnership contracts and investments from donors. In order words, He embraces the impossible and plots the course of our daring future.

His hard work and passion for FoodClique is unmistakably evident when he talks about eradicating hunger. As the CEO, he is focused on increasing and developing strategies for all organizational channels to ensure provision of more food to people in need through a network of agency that shares similar interest on hunger.

Bolajoko Fadipe believes that the best charity is to satisfy a hungry man and for this reason he has been at the forefront of fighting hunger, food waste and raising awareness on hunger in Nigeria for close to five years.

At the first glance into his eyes, all you encounter is a heart sold out to make a difference. Bolajoko is an individual who passes off any day as charitable, compassionate and public-spirited. He is a humanitarian and community builder who thinks hunger should be the least problem an ideal society should be faced with. He is devoted to ending hunger in area where he can exert his influence. He is a team player, energetic, dedicated with vast knowledge in contemporary issues.

He has been mentioned by different NGOs across the globe such as World Food Program (WFP), Ending Hunger (Italy), ONE (USA), Agent of Hope (USA) and 7 billion.org. He has had the privilege of being mentioned on popular Radio and Television programmes, Print Media and other online journals. He was nominated by the Lagos State Government for the Spirit of Lagos Award and on the 27th of May 2015, he was named as the winner at a glamorous dinner hosted by the then Executive Governor of Lagos Babatunde Raji Fashola (SAN) who lavished eulogies on him and encouraged him to keep up the good work.

In other to tackle this issue more and gain knowledge, he has visited the Food Bank of New York to learn how Food Banks operates and Agents of Hope in Detroit Michigan (USA) to improve his leadership skills. Aside being at the forefront of campaigning against hunger, he has through programmes, services and networking spread the word against hunger which has brought about his rise making him more involved on various issues from economy to politics in Lagos, Nigeria his state of residence.

He is also focused on increasing and developing strategies and channels thereby providing more food to people in need through a network of agencies that shares similar interest and vision.

Bolajoko is a man who brings hope to all. Statistics reveal that over 75% of Nigerians are food insecure, and 3 in 5 children, live in poverty. Therefore Hunger, being a threat, its eradication is what Bolajoko and over 2000 volunteers of “FoodClique support Initiative” tackles daily

Prior to starting FoodClique with his friends, Bolajoko as a teenager worked as a co-presenter and Producer with Super-Screen where he anchored College Line. He proceeded to ZeedLabs System in the early part of his career as the Business Development Director. He also worked at Paramount Web where his responsibilities included marketing, business development. In the 7th National Assembly, he served as the Legislative Aide and Secretary to Hon Abike Dabiri-Erewa (Chairman House committee on Diaspora Affairs). He also doubled as the business development personnel and production team member of the Diaspora Magazine and he was saddled with the responsibilities of presenting the magazine to the Vice President of Nigeria Prof. Yemi Osinbajo at the opening of Diaspora Day 2015. He is currently a managing partner at Fadni & McBee resources a software consultancy company with major concentration in web and enterprise applications.

He was among the delegates that participated at the 13th Presidents United to Solve Hunger (PUSH) Summit at the University of Illinois Urbana Champaign with the theme “Unify for a Hunger-free World” that had in attendance Ms (Ertharin Cousin) 12th Executive Director of World Food Programme (WFP) and Rod Brooks C.E.O. Rise Against Hunger. The Campus Kitchens Projects 5th Annual Food Waste and Hunger Summit at IUPUI Indiana USA

Other achievement includes a Future Award Nomination in Community service, a featured story on him by eTV South Africa as a Nigerian who wants to end hunger and recently a partnership with Lagos State Government as the official charity partner for the just concluded Lagos City Marathon , a one year partnership with emerging Real Estate Firm Cantagali as part of their Corporate Social Responsibility, Basheer Tosin Ashafa Foundation and Share Your Bread Foundation

When asked what his hobbies are he said “ meeting the food needs of hungry people and striving to make hunger history “but his profile will not be complete without mentioning his passion for sport especially Shooting Stars of Ibadan( 3SC) and Arsenal FC, so when not working he is busy watching football and he still dreams about a first champions league medal for Arsenal FC and Shooting Stars of Ibadan but he is more happy that he has a bigger passion and dream for the less privileged and ending HUNGER.